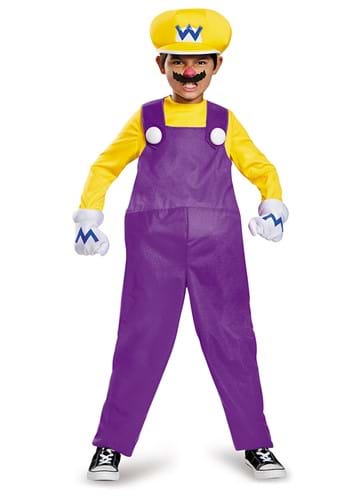 When most kids think of classic video games, they want to play as the heroes. Those kids want to play as Mario and save princess Peach. They want to go around as Link and defeat Ganon. They want to be Samus and rid the space station of the Metroid parasites. However, your kiddo isn't like most kids. They have no need or want to be the hero. It's a whole lot of work and a ton of pressure to be the hero. Instead, they'd rather cause mischief and have fun! So playing as the troublesome anti-hero is a much better fit for your little one.

Wario is Mario's archrival. He loves to cause all sorts of trouble for Mario and his younger brother Luigi. Now, your child can dress up as this yellow and purple wearing menace for Halloween.

This deluxe costume comes with everything you need to transform your little one into the devious Wario. His yellow shirt and purple overalls are combined into one easy-to-slip-on jumpsuit. Since your kiddo won't have a huge gut like Wario, the tummy on this costume is inflatable. Aside from the jumpsuit, your kiddo will also be equipped with Wario's signature yellow hat as well as a pair of white gloves. Wario's "W" is printed on both the included gloves as well as the hat. Lastly, this costume also comes with Wario's iconic zig-zag mustache. It will stay put through all sorts of mischief thanks to the adhesive on the back.