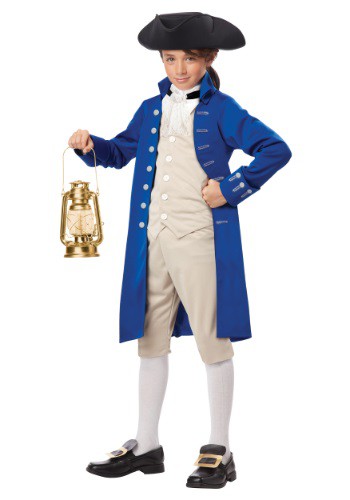 We all know the story, don't we? The story of Paul Revere's midnight ride to warn the American rebels of the impending British attack? Of course, we do. And how brave and courageous of Paul Revere.

Sorry? Oh no, we're not talking about the war bit! We're talking about the ride. Can you imagine? Hours and hours! Miles and miles on the back of a horse, bumpily running about in early April? How cold! How uncomfortable! And the road would have been dark, and it would've been hard to see. That poor horse probably couldn't even see where he was going! It's no wonder Revere was caught by the British at one point (don't worry, he got free). We're just saying: sure warning the colonists of the impending attack was all good and noble, but we would've been much more distraught about riding around in the dark on a horse. Although, that could stem from the fact we've never ridden a horse. Still. It sounds difficult and we are all the more impressed by Mr. Revere.

If you have a young one who loves tales of Washington, Hamilton, and Revere, well then, maybe it's time to let them be one of their favorite colonists. It's easy with our Kid's Paul Revere Costume. This polyester outfit includes tan knee pants with an elastic waistband, a jacket/vest combo, and a black foam tricorn hat. The jacket is blue with buttons printed on the front, and the vest is attached to the inside and fastens shut with working buttons. The outfit also has a 2-layer caravat that fastens to the base of the neck with a bit of Hook and Loop fastener. It also comes with vinyl buckles on elastic to go over any shoe.

In this outfit, your kid will be ready for any revolutionary matter that comes their way. Only, we'd recommend avoiding the horse if it can be managed. A midnight ride in a car would probably be just as good.