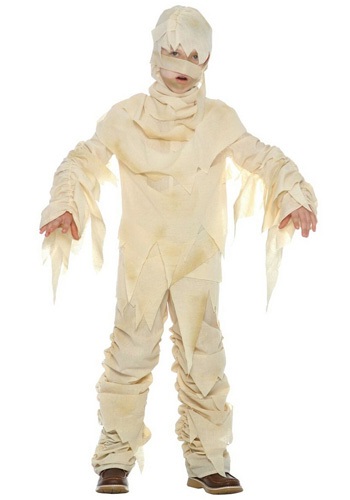 If you ask us, mummies get a bad wrap. (Sorry, we have been dying to make that pun.) But actually, they might be judged a little quickly. Just think of all that the mummy has gone through! Sure, it might be chasing you all over the place, but you have to look at things from their perspective.

They have been locked in a dark tomb for hundreds, if not thousands, of years. That would get pretty boring. They were trapped in their before the age of smartphones, they don't even get to play phone games while they are in there! They just lay there in their uncomfortable wrappings, staring at the wall in front of them. By the time they get out, they are so grateful that they just want to chase you down and give you a hug! After all, you saved them from that incredibly boring tomb!

This costume comes with everything your child will need to look like they are fresh out of the tomb! This costume is a lot easier to wear than toilet paper. It actually comes in the form of a jumpsuit! All you do is slide into the jumpsuit and they'll be ready to go, thanks to the gauze that is attached to the outside of the jumpsuit. We've also included a hood so that they'll be covered like a mummy from head to toe!

IF YOU WERE A MUMMY

If you were a mummy, what would be the first thing you would want to do after being released? After thanking the people that freed you, what would you do? We'd recommend getting a fresh wrapping. After 1000 years in a tomb, your gauze might have developed a bit of an odor. But after you freshen up, the world is yours to enjoy!