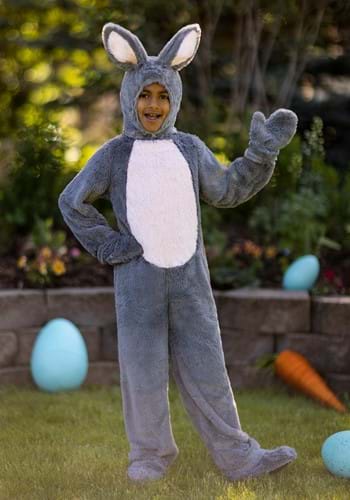 Can you imagine if humans had to hop around everywhere like bunnies do? It would actually kind of turn our worlds upside down. First off, you wouldn't be able to run anymore. All you can do now is hop around. And humans aren't built for that, so we would be pretty dang slow at it.

And how would we play sports? What if we had to play soccer while hopping, how would you ever kick the ball? You would have to jump in the air everytime you want to kick, which would really complicate things. We also imagine that escalators would be a little harder to use. You couldn't just put one foot on and then step on, you'd have to jump. That means that you are committing to stepping on that one moving stair, and if you miss it, you are going down like a sack of carrots! Let's just be glad we don't have to hop around like rabbits.

This costume completely transforms you into one of our little furry friends! This costume consists primarily of the jumpsuit you see above. It has a pink tummy and mitts built in to cover each hand! We have also included shoe covers, to wear over whatever shoes you please. Last but not least, you'll be wearing a little hood to turn your head into that of a bunny! The hood comes with two big ears right on top, which have pink on the inside, just like our furry friends have.

PERKS OF HAVING TO HOP

When we think about it, we can think of at least one perk of having to hop everywhere. It would be pretty nice being able to dunk a basketball. If we had to hop everywhere our legs would get pretty strong, and eventually, we'd be able to throw down a basketball like it's nothing! That would almost make hopping like a rabbit worth it. Almost.