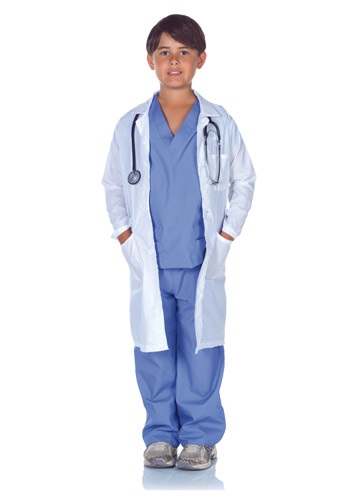 Some children are born with gifts. Some are musical savants, smashing on the piano like Beethoven by six years old. Some are quick as The Flash and destined to run circles around other kids in sports. We heard that your kiddo has been dissecting frogs since before he could walk. That's great! He could name all the major muscle groups before Kindergarten, and he prefers watching old reruns of medical dramas to pretty much anything else on TV. He’s even already declared his doctoral specialization: candy. It’s a…developing field of medical research. Wow, ok.

We have a good feeling he will love getting to finally look the part he so frequently imagines in this Child Doctor Scrubs with Lab Coat costume. All your lil' M.D. needs to complete this look is to top the blue scrub set and white doctor’s coat with an iconic stethoscope (and a to-go coffee cup if you’re seeking extra authenticity). Add a pair of comfortable shoes and he’s ready to put all those years of studying and hard work (all eight of ‘em) to good use and save some lives. Who would have believed you’d get here so soon?

There's Much to Do, Doc

Grab the little dude a clipboard and teach him to practice his handwriting, seeing as medical charts are mostly illegible anyway. Or teach him to run at least an hour or two behind schedule. Everyone will just have to get used to waiting patiently for his time, and no one can do anything, because he's so smart, important, and respected. Sadly, you can't just hand a medical degree over to a kid, unless he's the star of a 1980's comedy drama, and even that was a bit far fetched for our tastes. You can, however, dress your kid up in this Child Doctor Scrubs with Lab Coat costume and have him perform surgeries on all of his toys, STAT!