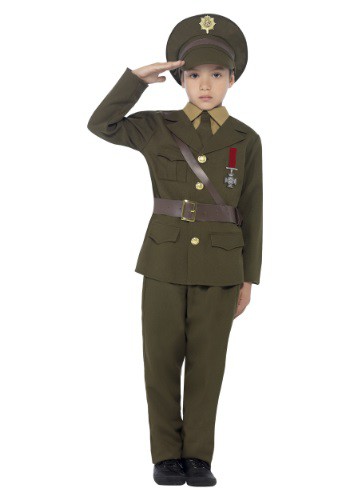 Your middle kid is used to taking orders. His older brother bosses him around, while his baby sister demands things left and right with the threat of a crying tantrum. And your little one? He takes it all with a grain of salt, stoically minding his duty to the family unit. That's impressive!

Show your middle kid that you trust his judgment and reward his tactical assistance in the mornings! This Army Officer Kid's Costume will get him off the front line and into the spotlight, and put him in charge of the whole crew for a change! He can command snacktime, plot the course through the grocery story, and organize after school pick-up. He can even put the troops to bed according to his own methods and schedule. Some days in a big family can feel, at times, like a battle, but this kid's costume is just the thing to help your most helpful child feel in control of the chaos. Of course, you're the real tactical mastermind, but in this outfit, your middle child can become your second in command, and that will please him to no end!

This classic-style army outfit features tons of military appeal! It's fashioned as a jacket, shirt front, and pants combo, with authentic accents that scream authority: gold-tone buttons, an attached belt with metal buckle, and a matching hat with an embroidered emblem! Now all he needs is stick straight posture, a 4 a.m. wake up time, and a clipboard with daily operations clearly outlined for him to enforce!

Of course, one doesn't normally think of a middle kid being the one in command—that's what makes your kiddo so unique. It's important to foster a sense of original identity and clear purpose, so he doesn't get lost in the bossiness and needs of his siblings. Plus, letting him be in charge of the platoon is totally adorable!