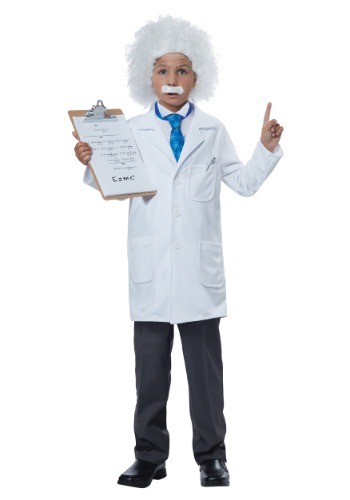 The Myth of a Man

Did you know Einstein didn’t actually fail math in school, as is commonly told? What actually happened is he failed an entrance exam to a college...because it was administered in French and he didn’t know French. In fact, on that test, the math part was the only part he did well on! Much of the true story about Einstein’s early schooling is that everyone could tell he was fundamentally brilliant, yet he was just often unchallenged by school subjects. And there’s so many more interesting facts about Einstein that your kid will learn when they pick up this Child Albert Einstein/Physicist Costume!

What better way to learn about a man and his impact on the world than to embody him in this genius look? Your child can throw this on, and then come home and tell you all about the general theory of relativity and what that means for the gravitational pull of black holes!

Your kiddo will have no problem becoming the most world's most famous scientist with this outfit is on! The costume consists of a lab coat with front buttons and 3 pockets, and featuring an “E=mc2” graphic on the back. The included shirt fastens at the neck and cord ties at the waist. And the wig is synthetic hair on a mesh cap with an elastic edge, to fit comfortably on your kiddo’s head while still concealing their natural hair. Hair is kind of Einstein's thing, so it's important to get that part right. Finally, the mustache has self-adhesive and completes the iconic Einstein look. Your little one will be unmistakable as the father of relative theory!

We Hope You Have Chalk

Because once this outfit is on, your child might have an urge to start working out massive equations on every surface they can get their hands on. Make sure they don’t go crazy on the wallpaper with marker, be prepared with chalk and let them use the driveway—trust us, it’s much easier to clean that way.