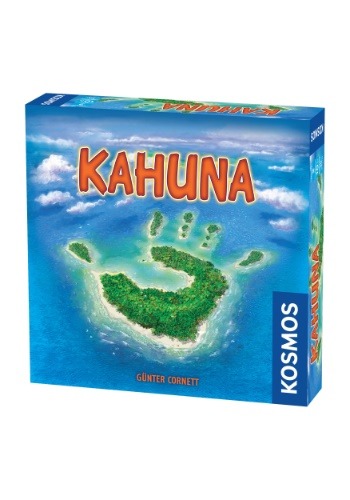 KING OF THE HILLS

We all wanted to take command of the largest hill that we could see. But, when there are several hills, all surrounded by sparkling waters amidst a tropical paradise... well, we suppose we're not talking about hills anymore. Those are islands!

Prove that you've got the stuff to rule the island chain in Kahuna. This is a 30-45 minute board game that pit two players against each other over three rounds. In each round, you draw and play cards with island names in order to place bridges from the corresponding island to another. When you have more than half the possible bridges on an island, you not only claim that island with one of your palm markers but destroy your opponent's bridges, possibly making them lose control of their own islands! When all cards or all of one of the players' bridges are spent, the round is over. In the first round, the player with the most islands gets one point. They get two points in the second. And, in the final round, each player gets one point for every island they control. The player with the most points at the end is the Big Kahuna!