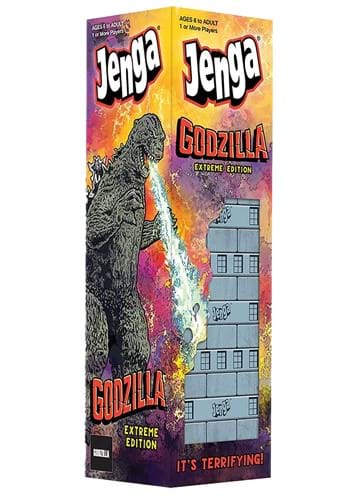 A Match Made in Heaven

We've watched every Godzilla movie that we can get our hands on. From North American version to the classic Japanese films! In just about every single one of them, the big lug spends most of his time knocking over buildings and causing mayhem. We've also played a ton of Jenga and that game is all about keeping a stack of blocks from toppling to the ground. We just have to say... sometimes, we sort of like being the one who knocks over the stack. Sure, you lose the game, but for a brief moment, you get to feel like an all-powerful monster destroying a skyscraper! That's a win-win situation if you ask us.

Well, anyways, JENGA had the bright idea of teaming up with the classic cinema monster for this special edition version of the game! It comes with 54 JENGA blocks, which are shaped like pieces to a building. You can use them to play the original JENGA game, or you can use the additional pieces to play the Godzilla: Extreme Edition variant, which has you trying to keep the building standing as Godzilla comes to attack it! It's definitely THE way to play if you're a fan of Godzilla.