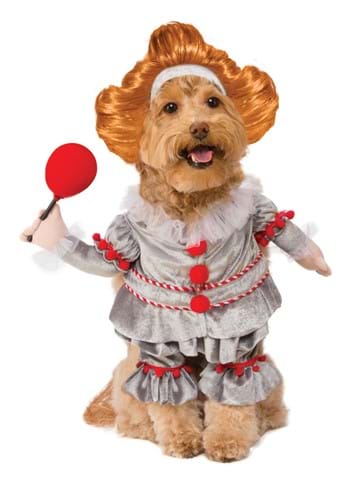 It would be better for everyone in Derry if Pennywise just kept sleeping after twenty-seven years. Unfortunately, everyone in Derry just can't keep their bad ways to themselves and the beast woke up, right on time. And all that darned dog had learned new tricks during the twenty-seven-year nap. We were shivering in our seats as we watched the clown seamlessly transform from horror to horror. In fact, if we had seen a red balloon floating in the theater lobby after the credits rolled, we would have rocketed out of our shoes! But for some reason, it seems to be a comfort to dress up our trusty pet as this ageless entity. We know that a canine disguise isn't below Pennywise but at least this way we can use a treat to get this clown to sit and stay until we can get ahold of our existential terror.

Bring Stephen King's clown to life in the cutest way in your own home this year when you dress Fido up in this Pennywise costume! The "pants" of the shirt slip around your pup's front paws while the sleeves are stuffed to keep them formed, in fact, one hand is still holding on to a red balloon! The costume is trimmed with a lightweight ruff and it has red pom-poms down the front. Topped off with a red wig, this costume will be instantly by horror fans!

Wouldn't it be nice to train Pennywise to play dead? That way anyone with a milk bone could make a swift getaway if a Chud ceremony didn't work. This costume is a great idea to let your dog take part in Halloween festivities. Dress up in a yellow raincoat and you two will be a match made in nightmares!