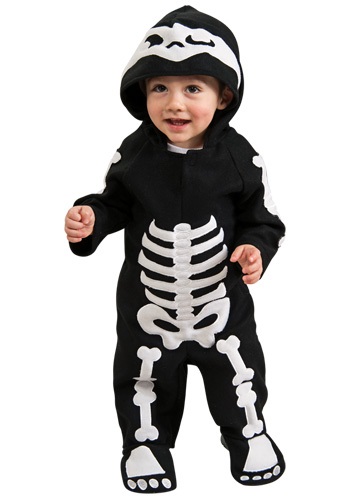 Skeletons get a bad rep. Sure, skeletons in the movies are usually evil. But it's not their fault! Most of the time they've been raised from the dead by an evil wizard or shaman, and they didn't even have a say in the matter. We would be grumpy too if you woke us up from a 200-year nap, we are crabby if you wake us up from a 20-minute nap! We think that if people just stopped for a second and tried to look at it from a skeleton's point of view, they would understand.

What's even more ironic about everyone's fear of skeletons is the fact that everyone has one! So, while you are running away from a skeleton, it's just one skeleton chasing another. Your skeleton just happens to have a little more meat on the bones.

That's why we have come out with this costume: To combat people's fear of skeletons. And what better way to do so than by with a super cute costume? By putting this costume on a toddler, we are forcing people to reconsider the stereotypes they hold about skeletons. They'll be wearing a black romper that has white detailing made to look like bones! While these bones are not anatomically correct, they do look adorable! Over this, they'll be wearing a hood with a little skull on top of it, finishing out the last of their skeleton. Their feet will be in attached booties, but their hands will be free, meaning they can still grab as much candy as they want while out trick or treating!

SKELETONS: NOT SO BAD?

We hope this has helped you to see that skeletons aren't so bad. They are just like you and me, they're just a few hundred years ahead of us!