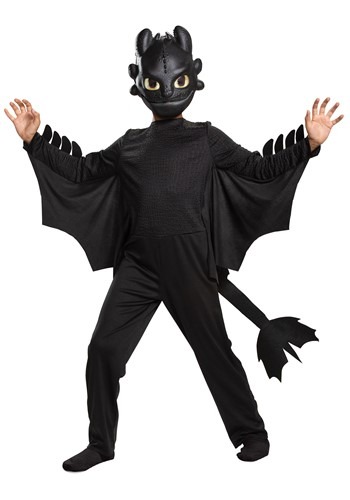 Kid's Classic How to Train Your Dragon Toothless Costume

Everything We Know about You...Is Wrong

A shadowy shape blots out the stars. A jet of blue fire streaks through the night and finds its target! "It's a Night Fury!" cry the terrified Vikings below! Everyone in Berk knows that to fight a Night Fury is to invite your own destruction! The sleek black-scaled creature is called the unholy offspring of lightning and death itself. It is incredibly smart, cunning, and never misses its target. As Hiccup learns, however, it is actually loyal and faithful friends, who love eating fish and are actually super adorable. Once they get to know Toothless, everyone on Berk will want a Night Fury of their own!

Transform into the coolest kind of dragon in Berk with this officially licensed Kid's Classic How to Train Your Dragon Toothless Costume! The jumpsuit fastens in the center of the back for quick and easy dressing when you get the urge to fly through the skies. The long sleeves are sewn with scalloped wing panels and embellished with soft fabric spikes. A swishy tail sewn to the jumpsuit's seat is tipped with a set of fins to stablize your flight. The molded plastic mask has Toothless's big green eyes, horns, and "toothless" grin. Mesh-covered eye openings let you see where you're soaring.

For years, dragons and Vikings were locked in an epic battle (mostly over who got to eat the sheep the Vikings were raising). But then, one boy and one dragon became best friends and the world changed forever. Grab your buddy Hiccup and get ready for adventure!