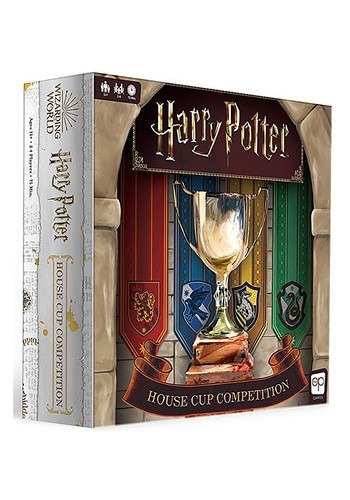 At the end of term feast, the winner of the House Cup winner announced, like always. While you knew it wouldn’t be your proud house that claimed the honor, you held on to a thin hope that some last-minute points would be assigned. No luck. Four another year, your house colors would not decorate the Great Hall and your points tracker would look a bit sad against the stone walls. The good news, however, there’s always next year and your optimism and determination promise to push you closer to victory!

Help noble Gryffindor, Slytherin, Hufflepuff, or Ravenclaw nab the cup this year with Harry Potter: House Cup Competition the board game! Each of 2 to 4 players join the game as a member of the four famous houses and works their way through a series of actions to advance their magic skills and earn points toward winning the House Cup. Fill the Hogwarts House Cup hourglass and take turns against rivals like Harry Potter, Cho Chang, Cedric Diggory, and Draco Malfoy using the included tokens, trackers, and game boards. At the end of the 75-minute game-play, the player with the most house points wins the coveted cup! So, whether you received your Hogwarts acceptance letter or not, bring your favorite house honor by competing in this board game version of everyone’s favorite school competition!