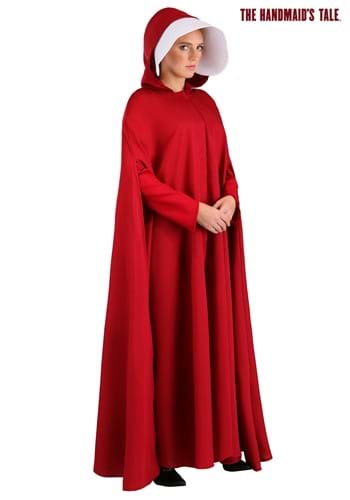 "R" is for Resistance

The ABCs of Gilead might seem a little bit dark, but if you keep your head down, this new life will seem ordinary enough. The rules for women are simple enough. Stay humble, speak only when spoken to, and for goodness sake, keep your eyes down. But sometimes the basic rules just don't stick. Sometimes, no matter how hard you try to keep a people down, they keep rising up. You can punish a woman for reading but that won't stop her from running her eyes over the envelope from an important official on your desk. You can make her wear a bonnet that works as blinders but that won't stop her from seeing the injustice of her situation. And you can keep her from yelling out but that won't stop her from whispering rebellious words while picking out potatoes at Loaves and Fishes. In the ABC's of Gilead, though the powers that be might protest, there's no doubt that "R" stands for resistance!

This long cloak will make you feel like you came straight from the eerie streets of Gilead. A licensed Handmaid's Tale costume, it has the deep red shade that we all recognize as well as a loose, modest fit. Fitted sleeves ensure you remain covered even if you gesticulate, though the side slits are open so you'll want to pair clothes underneath. A red hood tops the robe while the whole ensemble is polished off by the wide, white bonnet to bring your iconic handmaid look to life!

The situation in Gilead is serious, but the handmaids have proved again and again that their personalities survive through everything that they've been put through. Who knew having a sense of humor could help stoke a revolution? Pair this costume with little details such as an eye patch, sensible shoes, or a serious taste for defiance to bring your character to life.