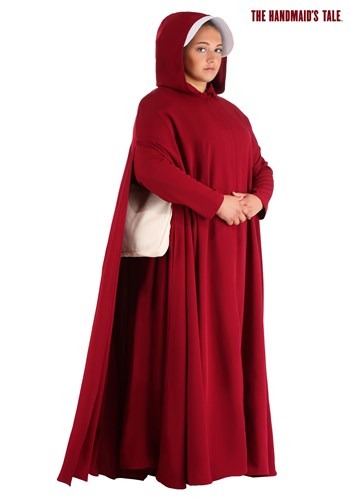 The world of The Handmaid's Tale is a bleak look at how tyranny can turn a normal society into a dystopian patriarchal society. People are separated into classes and women are treated like possessions. The good news is that hope still lives on. Some handmaids look to undermine those in control by plotting against the Commanders. So, while the world may be in a dire situation, you can still fight against tyranny! All you need is resolve and an officially licensed costume from the television series based on the Margaret Atwood novel!

This Plus Size Handmaid's Tale Deluxe Costume is an exclusive design that's inspired by the outfit worn by Offred and the other Handmaids living in the Republic of Gilead. It features a crimson red dress and a cape. The cape has an oversized hood that goes perfectly with the bonnet. The over and under bonnet pieces recreate the headpiece worn by Handmaids and the satchel adds a realistic touch to the outfit. You can put your daily necessities inside, or use it to smuggle critical info under the noses of the Gilead! When you wear it, you'll have the traditional look from the series.