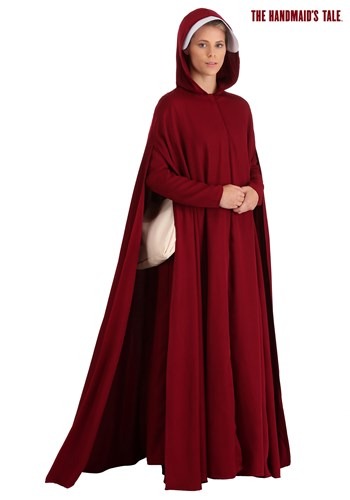 Life might seem bleak for Handmaids. After Gilead seized control of the United States, the entire world was thrown into turmoil, but few have it as bad as the Handmaids. They're forced into a cruel life of servitude by the Gilead, but not all Handmaids are the obedient pawns that the Gilead wants them to be. Some of them are plotting to undermine the powers and they're using every bit of their cunning and skill to make sure they stay one step ahead.

Do you have the courage to stand against the tyranny of Gilead? Then you had better use your wits as you practice your rebellion in this Women's Handmaid's Tale Deluxe Costume.

Inspired by the hauntingly captivating series on Hulu, The Handmaid's Tale, this women's costume recreates the iconic outfit worn by Offred and many of the other Handmaids. The adult costume is a crimson red dress, the symbolic color of Handmaids. It has a zipper at the back. The cloak is the same red color and has a clasp in front. The under and over bonnet have a traditional style, that almost looks like it came from the days of pioneers. Finally, the costume comes with a small satchel, like the one carried by Offred. Put it all together and you'll be ready to sneak behind the Commanders' backs to plot against the despicable ways of The Republic of Gilead!

The Fight Against Power

If you're a fan of the series and want to resist the patriarchy, then this officially licensed costume is the perfect way to do it. With a realistic style that comes straight from the series, this costume will have you ready to fight against tyranny in all of its forms.