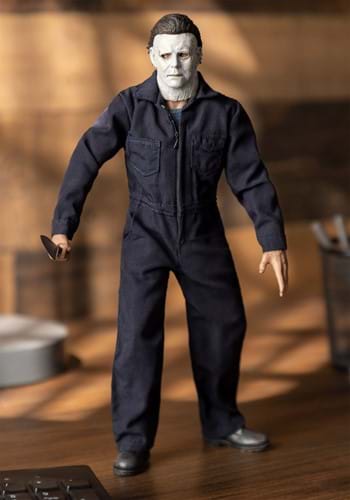 Can anything stop Michael Myers? Let's see. Knives? Nope. A bullet or two or six? No, that doesn't cut it. A multi-story fall? Come on, we've established that something as basic as gravity can't take down Mr. Myers. It's silly to wonder what will take down Michael Myers in the end, instead, let's celebrate his unending timeless nature! This Michael Myers action figure pays homage to the iconic serial character and all the moments he's had us peeking through our fingers at the screen! No matter what might happen in the next movie, this Michael Myers action figure will ensure that your iconic serial killer won't ever stop serving up thrills!

This twelve-inch tall action figure from Trick-or-Treat Studios has thirty plus points of articulation so you can pose this figure just how you want! As always, Trick-or-Treat Studios has worked in an amazing amount of detail! Michael is fully clothed in his jumpsuit from the 2018 movie, it even has a functional zipper! The posable figure comes with interchangeable hands, one for holding a knife and one for the bloody hammer, one even includes Michael's injured hand complete with gore. Yikes! The figure comes in a collectors box with a flip back window display, making this the perfect edition for horror collectors!

What's going to happen in the next Halloween movie? Well, we've all learned that there's no guessing by now. But perhaps you can play out a couple of scenarios with this Michael Myers action figure. Simply play the Halloween soundtrack for a little atmosphere and pose Michael with his accessories and the rest of your action figures. Sure, you might not get the play by play right, but at least you'll feel like you're a part of one of the most iconic horror franchises out there! It's sure to be a scream!