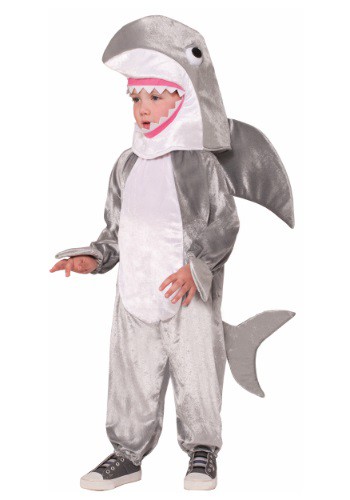 Great White sharks are scary. We know that they harm way fewer people than a lot of other animals and that a fear of sharks is, in most instances, irrational. But, all of the same, we just can't seem to help ourselves. It's probably because we'd be trapped in the water with these beasts. We can barely move in the water, and that feeling of helplessness would make it so much worse. You could paddle as hard as you want, you still have absolutely no chance of escaping a shark.

Sharks would be a lot less scary on dry land. On land, we would have the advantage. It really wouldn't even be a fair fight at that point. The shark wouldn't be able to move or breathe, it would actually be pretty sad. But, at least we wouldn't be trapped in the water with one of these scary things!

This costume will turn your child into a land maneuvering great white shark! Luckily, this costume is way less scary than the real deal. This costume will have people smiling in appreciation instead of screaming in fear. They'll be wearing a grey jumpsuit with fins on the back and a tail. There are also little fins on the wrists too! Even better yet is the hood. The hood is detailed to look like a great white, with little black eyes and a big open mouth! The mouth is wide open, allowing the child's face to see out.

When your kiddo dresses up as a shark, they will be employing a whole new survival tactic to find food. Rather than hunting for prey like there relatives in the sea, they'll be trick or treating door to door to receive sustenance. People will see how cute their costume is and simply give them food. Just like that, they have developed a unique source of food.