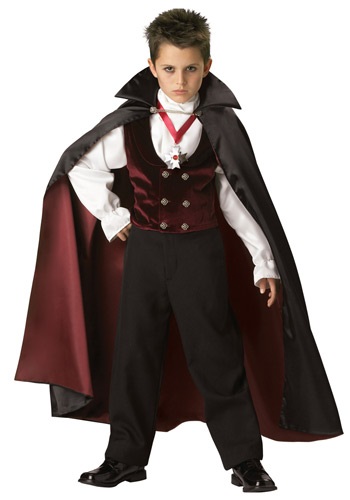 When your kiddo said they were "getting into goth," you were probably slightly annoyed, expecting dark eye makeup, long jagged cut hair, some depressing music, and maybe new black drapes in their room. But to your surprise, they meant gothic—as in, Bram Stoker, Mary Shelley’s Frankenstein, and especially elaborate flying buttresses on large stone cathedrals. Trust us, we’re as surprised as you. So, in that case, pick up this amazing looking Kids’ Gothic Vampire Costume for them to let them know that no matter what they’re into, you support them!

Seriously. If your kiddo wants to explore gothic themes a little bit, what’s better than the original source of all things vampiric? Bram laid it all out in his book, and we've got to say, the original is still the best! This famous vampire can still go out in day time and trick people into following his orders. It’s a pretty strong set of powers. And we think a rookie goth like your kid will dig it, too!

Not to mention, gothic vampires have the best sense of fashion around. Take this outfit, for example! A maroon, velvet-like, double-breasted vest with attached sleeves are just the start! A white dickie buttons at the top, and the black pants have an elastic waistband to fit for comfort. Most importantly, the black cape is lined with purple on the inside and features a large foam collar. It secures around the shoulders with a silver chain and two buttons and honestly, it just looks so cool. Finally, to finish the look, is a silver gothic medallion with red rhinestones in the middle. How posh. We can see why your kid is into this whole gothic thing!

Sure, it's a little unusual of a phase for a kid to go through, but hey, it is also pretty academic, if you really think about it. So maybe your child is a budding literary theorist or art historian. Regardless, we’re certain that he’ll love exploring gothic themes in this great costume!