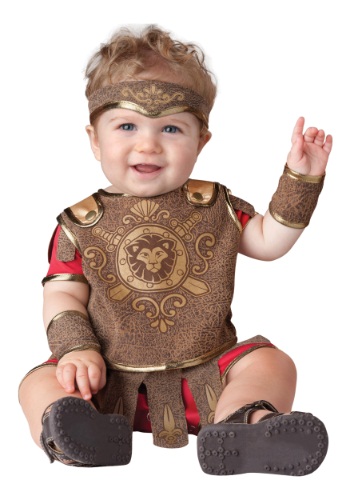 So, your child is an infant gladiator? That's absolutely crazy. We have heard that the infant gladiator class is the hardest to fight in. Those toddlers are some of the must cutthroat fighters to ever step in the arena. And now your little one needs to learn to fight before they even learn to read; before they can hardly talk. That will make the whole process considerably more complicated. Without being able to talk, training them to fight will be quite difficult.

Not only that, their balance is probably lacking. So, the whole fight will probably be done while crawling. We have to admit, we are nervous for them. We hope that you have taught them well! We just need to look at the positives. The fame and glory of winning will be so awesome! They'll be about the youngest fighter to ever win a match in the arena, which is no simple feat.

Your child might not be quite ready to become a gladiator, but there is no reason that they can't look the part! They'll be wearing a one-piece jumpsuit that secures on the back with Hook and Loop fastener. The jumpsuit is red and has fake armor accents on the outside so that they'll look battle ready. The armor has a lion logo on it and the jumpsuit has gold trim and detailing that goes perfectly with the gauntlets and headpiece we've included with the costume. All they'll need now is a little toy sword and the look will be complete.