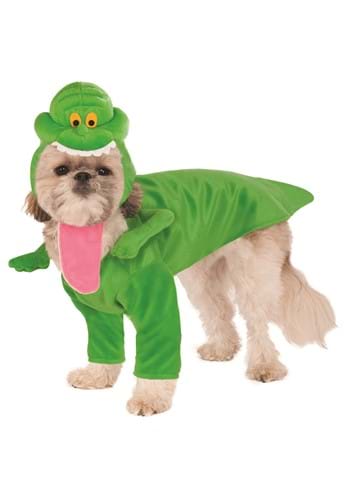 The furry phantom has been spotted all through the house. It thinks it is sneaky and mysterious. But, it's actually rather clumsy and makes quite the racket. Its efforts to snatch away the delicious snacks always leave behind a ton of evidence. To make it worse for their stealthy capers, the phantom has quite the sad face whenever a mortal asks the dreaded question, "Did you do this!?" Head down, eyes sad, the furry phantom would like nothing more than to fade invisibly away and sneak through the wall like a ghost.

Maybe it is time to give your little pooch the benefit of the doubt. Or, at least, let them feel a bit more ghostly. With this officially licensed Slimer costume from Ghostbusters, you can let your four-legged friend feel like they are floating! This costume is a green dog shirt that has some extra ghostly stuffing inside. The puffed-up hood looks just like the iconic (and slimy) ghost... all without the residue!

Catch 'em in the Act!

When the furry phantom next strikes in its never-ending quest for treats, you'll have a better chance of seeing it happen in real-time when they're in this puffy Slimer costume. And, if nothing else, it gives your dog an way to blame the ghost!