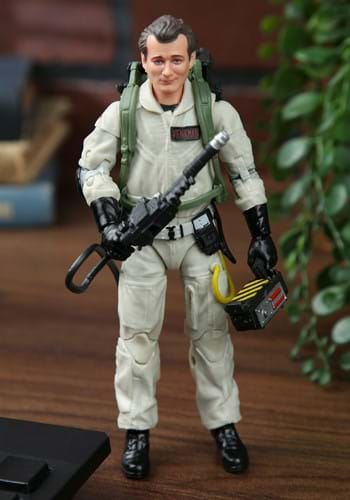 Peter Venkman has a super secret weapon. It's not his Proton Pack. It's not the Ecto-1. It's not even that amazing Ghostbusters uniform that he always wears to the job. Yep, his secret weapon is his mouth. Pete can talk his way out of most situations, whether it involves humans, ghosts, or an ancient god-like being from another dimension... of course, he always keeps that Proton Pack handy when the words fail!

Now, you can bring the smart-mouthed member of the Ghostbusters to your collection when you get this Ghostbusters Plasma Series Peter Venkman Action Figure.

This officially licensed Ghostbusters action figure has plenty of great details from the 1984 film. The 6-inch tall figure is wearing his iconic coveralls that he wore during dangerous ghost missions. He even has a name tag on his chest. The figure has 12 points of articulation and comes with some of his ghost-hunting gadgets that fit into his hands. Also, when you purchase this figure, you get a piece of the Ghost Terror Dog. When you purchase all of the Plasma Series figures you can complete the Ghost Terror Dog figure and add it to your collection!