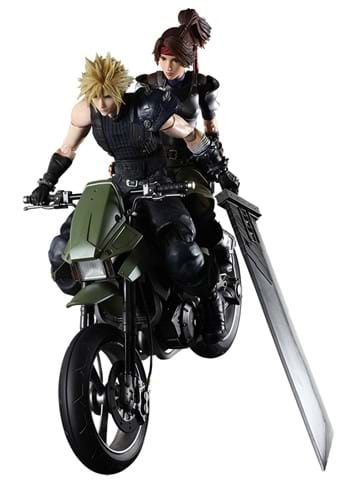 We know. In the original Final Fantasy, there was a love triangle between Cloud, Tifa, and Aerith (or Aeris, if you're old school, like us). But, after playing Final Fantasy VII Remake... we want to throw Jessie's name into the game. This time around, she's got a lot more depth, and her chemistry with Cloud? Well, she's come a long way from her polygon self of the original Playstation!

This Final Fantasy VII:R Play Arts Kai Jessie and Cloud Set captures the essence of their motorcycle ride through Midgar perfectly! Each figure is sculpted out of PVC material and has an astounding level of detail. From the texture of cloves sweater to the pouches on Jessie's waist, each detail has a realistic look that will put most action figures to shame. The motorcycle has a matching level of details

Both figures are fully poseable and can be placed on the motorcycle to recreate the scenes from the game, or separately to suit your collection. The figure set comes with many interchangeable hands for each figure, which allow Cloud to grip the handlebars or hold his Buster Sword, which is also included. The set also comes with an SMG for Jessie to hold, and stands for each figure and motorcycle.

When you have these figures in your collection, you might just forget all about Tifa and Aerith! It truly is the ultimate Final Fantasy VII collectible set!