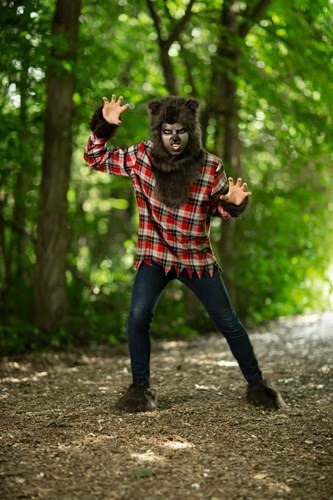 Werewolves have a really interesting and terrifying history. They were first referenced as far back as 1 AD, but the story has continued to evolve over time since then, with changes in culture and religion. But did you know that the fist werewolves actually captured (that we have record of) were from the 1500s in Western Europe? Based on historical records, it’s was later shown that these guys were such gruesome killers—so terrible, in fact—that they were assumed to be part-wolf. Anyway, if you really want to creep people out at the next costume party, or any other time really, pick up this Plus Size Fierce Werewolf Costume, and then explain the even darker side of werewolves than what most people know!

Honestly, we can’t think of anything scarier than a werewolf right now (politics aside), and after seeing you in this and hearing your history lesson, neither will your friends! Who would have known, based on the shirtless teenagers in those Hollywood movies, how dark werewolf history really is?

This rugged and nightmarish look consists of a long sleeved red plaid shirt that features brown faux fur attached to the cuffs and the collar. A matching faux fur headpiece has attached ears for a frightening effect that will linger in the back of everyone’s minds for days. Finally, matching brown furry shoe covers wrap over your feet and complete your lunar transformation! Sure, you look horrifically great, but just be careful who you reveal your were-self to, you never know who might be secretly looking to capture these kinds of monsters.

Oh, and try not to bite anybody when you’re in werewolf form. Not everybody wants to become a magical night monster (lame!), especially without having any time to think about it! Historically, bites weren’t a way to transfer werewolf-ism (it was mostly deals with the devil)...but it’s still just rude to bite someone.