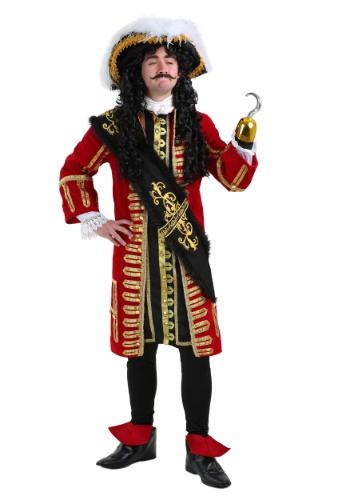 When portraying a pirate, it’s bad form to insult them. Slapping on a simple black coat, penciling on a beard, and claiming to be Blackbeard would make anyone a salty dog. Pretending to be Long John Silver without a proper peg leg and talking parrot would have you being shown the plank. But worst of all would be showing Peter Pan’s archenemy any more guff than the lost boy already has.

Captain Hook, fearsome leader of the Jolly Roger, may have a couple of silly fears, but rumor has it he was raised by Blackbeard and became the only man Silver ever feared. So, while a boy who never grows up, a crocodile, and the sight of blood makes Captain Hook’s skin crawl, he’s no one to test. Luckily, you’re here! And this Elite Captain Hook costume ensures you show Neverland’s legendary pirate the respect he desires!

Get dressed for a high-sailing Halloween with this exclusive costume! You’ll start your transformation into the iconic Captain Hook with a pair of loose-fit black leggings and a black tunic. The tunic features multiple golden trims and buttons to give it a luxurious look. Pair the included white satin ascot under the tunic's collar to get the costume looking even posher. Ensuring the costume is identifiable as Captain Hook’s, you’ll find a red velvet and gold-trimmed jacket included. Polish the stunning ensemble with the included black and gold sash, faux fur-trimmed pirate’s hat, and shoe covers. Just don’t forget to pick up a hook—unless you’re playing the captain before he met that rascal Pan.

Adventure to Neverland as the one and only Captain Hook when you order this Made By Us Elite Captain Hook costume! Featuring everything (except the hook) you need to be the iconic character, you’ll be ready to live out the legend’s tale from before Peter Pan tossed his hand to a croc. Add a hook to bring the story all the way to its thrilling end!