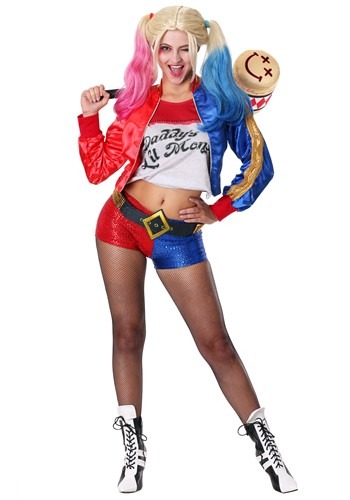 She has been known to be quite vexing.

We are, of course, talking about the criminal queen of Gotham herself, Harley Quinn. Formerly known as Dr. Harleen Quinzel, she used to be a practicing psychiatrist, before falling head over heels (literally) for the crazy clown himself: the Joker. Since then, she's caused chaos and mayhem with her puddin', usually with a giant smile to boot.

And despite her chaotic relationship with Mr. J, Harley has a lot to offer as a fighter. She's an exceptional gymnast, proficient with weapons, and of course, kind of crazy. Which is probably why she was drafted into the Suicide Squad. All of those skills would be very useful if you were sent on suicide missions with a bunch of other crazy criminals. You're more likely to jump right in, swinging a baseball bat, then to get scared and freeze up. So yeah. Crazy = asset.

So if you're feeling like a bit of a crazy spunk yourself, perhaps you're ready for Harley's Suicide Squad threads. Our officially licensed Deluxe Harley Quinn Suicide Squad Costume has everything you need to get suited up. The satin jacket has a sewn-in "Daddy's little Monster" shirt, there's sequined shorts, a printed belt, and fishnet tights (shoes and wig sold separately). Just find yourself a nice hefty baseball bat and you'll be ready to hit the streets with the rest of your crazy squad. Although, if you start hearing voices, we recommend you don't listen.