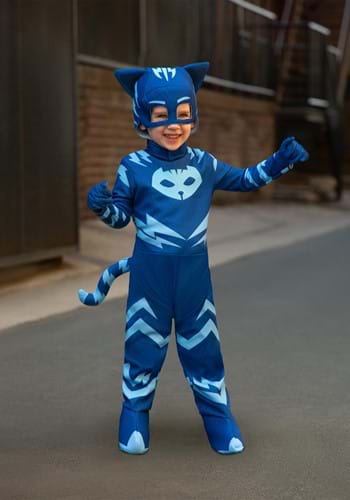 It’s every kid’s dream that he may be harboring a secret identity and magical powers that haven’t yet been revealed to him. Now, you may know the truth, but he still believes in magic and mystery, and you wouldn’t want to take that away from him, would you?

We didn’t think so! So, try this plan on for size: sneak into his bedroom while he is sleeping and hang this Deluxe PJ Masks Cat Boy Costume on the door with a note that says, “It’s time your know the truth about who you really are.” When he comes to the breakfast table, confused, start calling him “Connor” and ask what Amaya and Greg are doing after school. By the time he returns from class, he will believe that he is, indeed, Cat Boy, and will race into his room (with superhuman speed, of course) and put on this ensemble for his first ever evening of crime fighting! What a dream come true for his birthday!

Just be prepared to hear “PJ Masks we’re on our way, into the night to save the day!” at least once a day for the next month or two. But, c’mon. Isn’t it worth it? Look at the light in your little one’s cat eyes as he peers out from beneath this blue foam hood and mask. Look at his joy as he swishes the tail of this jumpsuit past the couch, and take note of his new confidence he has as he heads out to school. Remember, Cat Boy isn’t just a member of the PJ Masks--he’s the leader! Of course, eventually he’ll learn the truth--that he’s not the REAL Cat Boy after all...although, his hearing has gotten extremely keen and his agility is now through the roof, so maybe there’s something to that whole “mind over matter” thing.