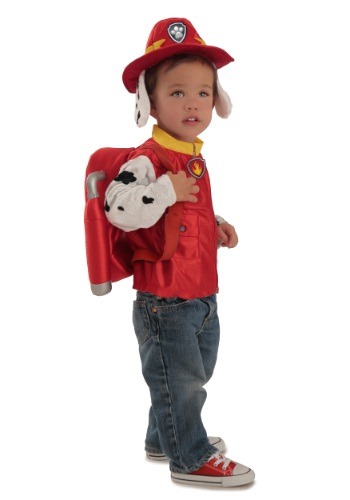 There's a certain firefighting dalmatian pup who's been putting out lots and lots of blazes around Adventure Bay lately, and though he loves his job, he's long past due for a night off. But not just any night. He's hoping to finally experience Halloween for the first time and try his hand at some good, old-fashioned trick-or-treating. But since Ryder has Halloween plans of his own, somebody needs to keep an eye on our little hero as he goes door to door collecting candy. If you think you're up for the job (and since you're here, we're pretty sure the answer is yes!), have your little hero suit up in this Deluxe Paw Patrol Marshall Boys Costume for a night of Halloween fun!

This officially licensed outfit is your kid's ticket to becoming everyone's favorite Paw Patrol pup, the brave, excitable, courageous, and, okay, sometimes slightly clumsy Marshall! He's the one who's always at the ready with a water cannon when a fire breaks out, not to mention the pup all the others turn to when they've taken a spill during a mission and need a quick checkup. Performing all those duties takes a lot of energy, which is why your little guy is perfect for the job!

The Deluxe Paw Patrol Marshall Boys Costume has everything he needs to embark (pardon the pun) on his Halloween mission. That includes Marshall's firefighting backpack, a jacket with fuzzy, spotted sleeves, and, of course, the firefighter hat (which comes with Marshall's adorable spotted ears). And if you've got friends who want to join in on the fun, have them check out our other Paw Patrol costumes!