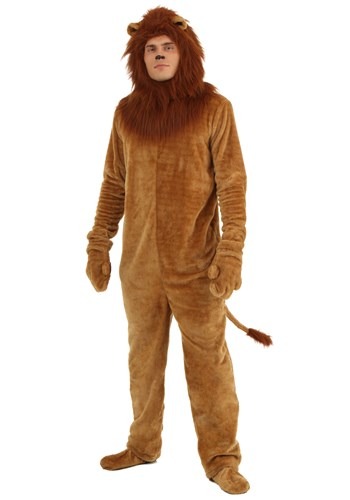 KING OF THE JUNGLE

When you dress up as a lion, it's really not all that different than dressing up as a king. After all, Lions are king of the jungle (or maybe more accurately, the savannah)! The only real difference is that lions have animal subjects rather than human! Oh, and lions eat their subjects, which is a little weird, no, extremely weird, now that we think about it... Who does that? Who eats their loyal subjects?

The more we think about it, the less lions really seem like kings, and the more they seem like just another animal at the top of the food chain. Think about it, what royal duties do you ever see lions attend to? Are they building infrastructure on the savannah? Are they starting food programs to help feed the starving antelopes? No, their only food program is to eat the antelopes, so that the surviving antelopes have more food to share between them. Not a great king if you ask us!

This Deluxe Lion Plus Size Men's Costume starts with a fleece bodysuit that zips up on the back to keep it in place. The bodysuit comes with mitts that look like paws, and shoe covers that look like paws, meaning that you are a lion through and through! But, what is really going to convince people you are a lion is your hood. The faux fur hood has ears on top and fastens on with Hook and Loop fastener behind the neck. Looking to bring a lion cub along with you? This costume is also available in infant and child sizes!

So, maybe lions don't make the best kings. That's okay, they are good at other stuff! They are incredibly strong and fast, and they are fierce hunters. So, even if you're embarrassed to call yourself king of the jungle, you can be proud to call yourself a lion.