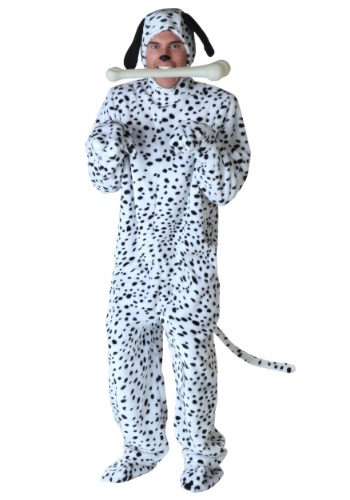 ONE IN ONE HUNDRED AND ONE

Everyone wants to be unique, one in a million or even rarer.  And, we can't blame anyone for such a lofty prospect. But, such a thing also requires you to actually interview a million people and verify that you aren't like any of them.  That's just exhausting.  Much easier to blend into the crowd for most ways and then find one or two little traits that make you your own unique self!

After all, just think of how many groups of same-selfs are out there with just a tiny personality quirk that helps keep them split up from the crowd.  You've got the seven dwarves, the three bears, the ninety-nine red balloons.  Well, you get the drift (and all without actually being a balloon).  So, time to see what you can do to help make your mark in a world with a hundred others.  Plus, then we might finally get to name all those little puppers!

We have no doubt that you'll help in figuring out which pooch is which when you hop into this Dalmation Plus Size Men's Costume.  With so many pups out there, it was going to be impossible to figure out what to name any of them.  You'll figure it out lickety-split when you're in this black-spotted white fur jumpsuit with stuffed puppy tail and mitts sewn onto the back of the wrists.  The hood has an easy hook and loop feature for easy fastening and has soft felt ears sewn onto the sides.  Elastic at your ankles keep the look from wandering so you can give that rear a good shake to wag your tail!

You can take over an entire establishment and recreate your home version of the lost family when you and a hundred of your best pals get together for some tail-wagging fun in this dalmatian reunion!