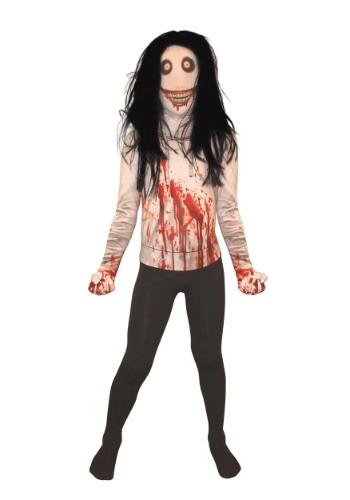 Alright, so if you're anything like us, you saw this outfit and were immediately creeped out. You don't even need to know anything about who this is. You just know that the white, nose-less face with the joker-esque smile and wide, lidless eyes are terrifying. What you may not know, is that your fear is a good thing. Why? Well, because this is Jeff the Killer and the whole purpose of Jeff the Killer is to scare your pants off.

You see, this is a character from the internet. An urban legend of the internet, really. A whole slew of terrifying tales have cropped up, describing his murderous campaigns in hopes that you'll be frightened. Panicked. Aghast even. And if the costume alone is creeping you out, sans scary stories? Well then, Jeff is doing his job.

Now, if you were, say a kid who delights in the dread of others, a character such as Jeff the Killer would be magnificent. Not only does he look scary, but he has a scary background to boot? Perfect, especially if you want to do some scaring yourself. Terrifying people as Jeff the Killer is now as easy as putting on a morphsuit, such as our Kids Jeff the Killer Morphsuit. This mostly polyester jumpsuit is fully printed to look like dark pants and a white hoodie splattered with blood. The jumpsuit fully encloses the head, hands, and feet (which will obstruct vision), but there's a 2-way zipper that runs up the center of the back and head. Just hop in, zip up, and bam. Instant Jeff.

So there you have it. Your little macabre kid could go traipsing about as a terrifying killer from the internet. Isn't that just great? Gotta love the modern era.