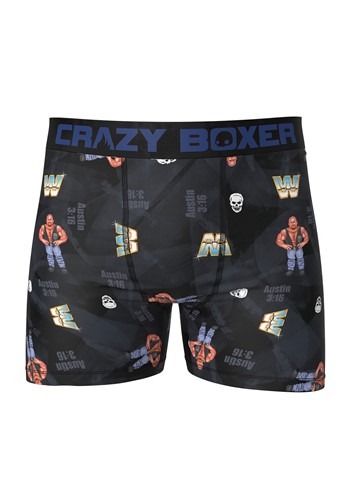 You know how almost every woman wants to be Elizabeth Bennet? You didn’t know that? You now have a Secret Fact about Women; use it wisely. Anyway, we’re guessing that almost every man wants to be Steve Austin. That dude is crazy! He can body-slam a wrestler twice his size! His wrestling persona involves drinking beer! A LOT of beer! Who wouldn’t want to be – or at least hang out with – a guy like that? Fortunately for you, you have the heart of an Austin! You have a champion’s courage, a winner’s determination, and frankly, great taste in WWE memorabilia.

Austin 3:16 says you should get these officially licensed Crazy Boxer Retro Stone Cold Steve Austin Briefs! Ok, maybe that’s not exactly what our favorite WWE personality said, but we think he would definitely approve of these polyester-and-spandex briefs printed with his image and WWE logos. The wide, elastic waistband is super-soft to give you maximum comfort while delivering the Stunner.