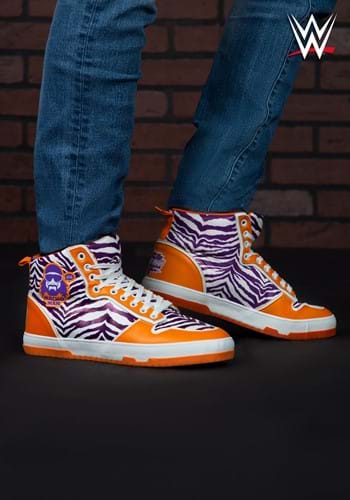 Can you feel the madness? The Macho Madness? Macho Man Randy Savage was the cream of the crop and he introduced the world to Macho Madness back in the 80s. And it's no surprise that the Macho Madness still lives on to this day. His wild antics, amazing wrestling skill, and his bold style made him a fan favorite... and now, we finally captured his signature style in these WWE Macho Man Canvas Shoes.

These officially licensed Macho Man Shoes are exclusive footwear for WWE fans that you won't find anywhere else! They recreate his audacious style during his reign as the greatest WWE star of all time! The canvas shoes are orange with purple and white zebra stripe accents, both inspired by his classic outfits. The side of each shoe has Macho Man's face on them to help you channel your inner Randy Savage. If you want to add a splash of Macho Madness to your everyday wear, then these wild shoes need to be a part of your wardrobe!