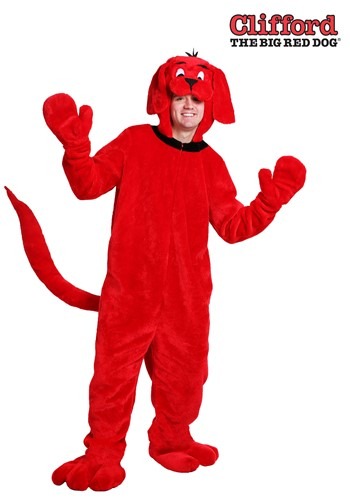 To have enough space for a dog like Clifford, you would need to live out in a massive open field. And to buy enough food for a dog that size, you would be paying a small fortune! Despite these challenges, if we ever ended up having a massive dog, we would love him all the more for it. We could even ride him like a horse! You could at least save some money on gas then. What do you think, if you ended up with a dog that size, could you make it work?

This costume will turn you into Clifford the Big Red Dog! Unfortunately, you won't be quite as big as Clifford. We don't have any way to help you there! You'll be wearing a red jumpsuit with a front zipper. The hood has a softsculpted face that looks just like the big dog himself! The jumpsuit has mitts attached and shoe covers that will cover whatever shoes you might be wearing. This officially licensed and exclusive costume is every bit as unique as Clifford!

What would be your favorite part of owning a dog like Clifford? Would it be trying to play fetch with the biggest ball you can carry, or would it be going for runs with your dog and trying not to get stepped on? There are so many crazy possiblities, hopefully someday we might experience them for real!