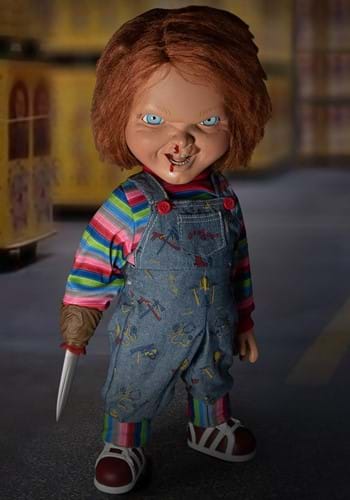 At least, this little fellow looks like a kid. How could he be dangerous? He's rocking overalls, he's got a little chubby belly. But anyone who's been following the horror genre over the last thirty-odd years knows that Chucky is one doll you don't want at recess! He likes fire, chaos, and anything sharp! He won't say no to a little black magic, either.

Chucky stands over a foot tall at fifteen inches. He bears a determined expression, which is a good thing for him because he's got a bloody nose and he's replaced his hand with a blade. If you prefer, you can swap out the blade for his normal hand to represent the Lakeshore Strangler in his doll-form pre-conveyor belt incident.

The discrete button in back makes him speak seven different phrases from the movie including, "Alright kid, fun's over" and "Can't keep a good guy down". His face is alarmingly detailed with angry wrinkles around his startling blue eyes, a nasty grinning opened mouth and an orange, shaggy head of hair. As always, this Mezco figure comes in a collector-friendly box with a window, allowing you to display Chucky safety and know for certain that he hasn't moved in the night.