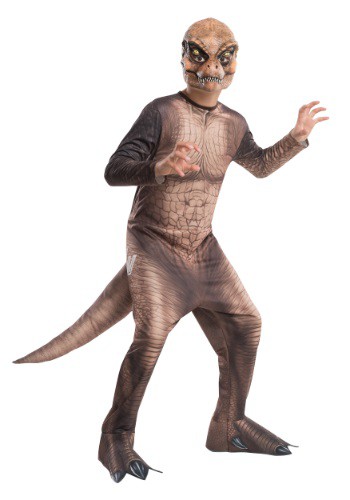 Do you remember playing Jurassic Park as a kid? Man was that a blast! We always tried to call the best dinosaurs before any of the other kids on the playground. In the best cases, you were a raptor. Sometimes you were the triceratops, and in the worst cases, you were the brontosaurs (they are adorable but come on, carnivores only). The best time to play this game was when you were able to be the mighty T-rex. Running around the playground with little T-rex arms not only was hilarious looking (kids don't care what they look like when they play, what a great mindset) but a ton of fun when they finally captured their prey. The T-rex is a beast of Jurassic proportions, and kids have Jurassic imaginations, so we know your kid will love our officially licensed Jurassic World Kids T-Rex Costume!

Jurassic World was released in 1997 and has been ubiquitous in our society since its first movie's release. You couldn't throw a rock back then without hitting something dinosaur-related. It makes sense, as they are still a ton of mystery regarding dinosaurs, especially for kids. Like how they went extinct? Was it a meteor, a flood, or something we can't even guess? We're sure some people more intelligent than us can tell you. What we can tell you are some great uses for this costume! Your kid can wear it to school for Halloween and have all their friends ooo and awe-ing over the little details that make this costume great. They can even wear it for a birthday party (hopefully, it's a dino-themed party). We could give you a few more ideas, but as we all know, kids can be even more creative than adults sometimes. If you have a little one running around, ready to be let loose, we know they will love this Jurassic World Kids T-Rex Costume.