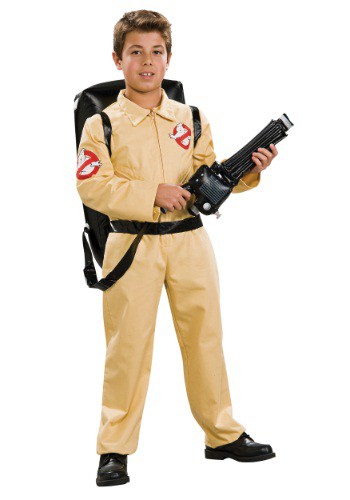 So your little guy came home from school the other day saying that some kid in his class said some (frankly forgettable) Arnold Schwarzenegger movie from 1984 was the best movie of the 80s. Your boy said that didn’t sound right, but wanted your opinion. Umm, obviously, you have a lot of opinions about this.

Our suggestion, don’t sit your kid down to watch movies all day, and don’t sit him down to talk about the finer points of the extent of German Existentialism in modern American movies, or the lasting impact that special effects from the 80s made on pop culture--both of you have things to do, and neither of you have a week to put together a fully formed argument. Instead, just pull out this Deluxe Ghostbusters Boys Costume from your closet and give it to your kid to put on. As soon as he zips it up and straps on the proton pack, he’ll know exactly why Ghostbusters was the best movie to come out of the 80s, no discussion required.

This costume is so cool, you’ll be able to see the comedic brilliance of Bill Murray, or the dry wit of Harold Ramis in his eyes; or maybe you’ll sense the comedic timing of Kristen Wiig and the genius improvisational ability of Kate McKinnon in his actions. Either way, this officially licensed outfit--complete with printed Ghostbuster logo patches and an inflatable proton pack--is perfect for convincing any 80s cinephile about where this movie stands.