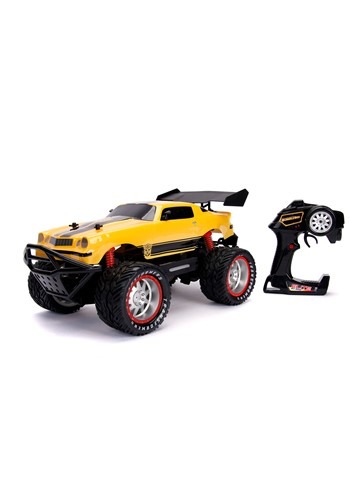 An Alien in Your Living Room

Far away in space, on the planet Cybertron, an alien race unlike any other is locked in combat. The kindly Autobots are in danger of being overpowered by the evil Decepticons. The scout B-127 flees ahead of Optimus Prime to establish a headquarters on a foreign blue and green planet….and ends up with a voice box damaged from an enemy attack. Fortunately, this friendly alien was able to scan and transform into a toy Chevy Camaro and hide in a toy warehouse. His plans took a slight detour when a kid liked his style so much that he purchased B-127 in his toy form and had the robot shipped to his home. The Autobot doesn’t mind, though. Life as someone’s favorite toy seems pretty great!

You don’t need to travel to Cybertron to see a real Autobot! Simply get yourself an official licensed 1977 Chevy Camero Bumblebee with Coin 1:24 Die-Cast! A handy remote fires up the 2.4 GHz turbo and a built-in rechargeable battery offers hours of fun. We’ve yet to see it morph into Bumblebee, but keep an eye on it – it’s probably just biding its time!