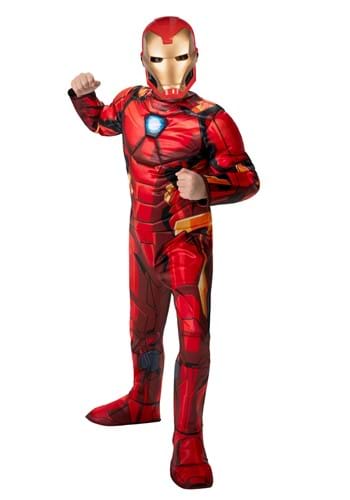 The Suit and I Are One

In a way, you started it all. Other superheroes like Soldier Boy over there may have come before you, but you were the first one to proudly own your alter ego and make it cool. Before you know it, you're banding together with a group of Earth's mightiest heroes to stop anyone who threatens peace and safety: a god of mischief, for instance, and a power-hungry AI. Doesn't matter: They're no match for the suit!

Protect Earth - or avenge it! - in this officially licensed Marvel Iron Man Costume for Boys! The one-piece costume fastens up the back and is printed all over with awesome graphics of Iron Man's armored suit, including an image of the Arc Reactor on the center of the chest. The sleeves and upper torso are padded to give you the appearance of super muscles. Boot covers secure under each foot. Add the plastic mask and you're finished suiting up!

I Am Iron Man

Ever wanted to build an incredible (and incredibly cool) suit of weaponized armor that can fly you anywhere you want to go? Us too, but it turns out that the technology is kinda complicated. This costume is a pretty great substitute, though! Plus, if you wear it around Halloween, it has the bonus of being able to help you get candy. The real Tony Stark would have a lot more trouble collecting delicious chocolate bars and sour gummies (and probably have a lot more safety violations, to be honest.)