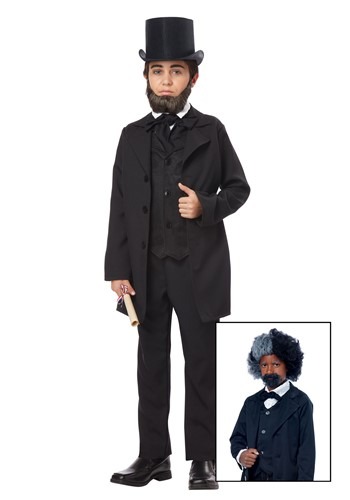 Abraham Lincoln, the 16th president of the United States. How would you like to have something like that on your resume? We know that we would! But, you don't develop a reputation like Abe Lincoln's without a whole lot of work. If you were going to try and recreate it, we can tell you where to start. First, become a lawyer. Then, you'll want to become the presidential nominee for the Republicans and become elected president.

But, this is only the beginning, we're afraid. Next, you'll have to abolish slavery (Which will be tricky, considering it's already abolished.) After this, you'll need to fight a civil war, and win, bring the seceded states back to the Union. Then, unfortunately, Abe Lincoln was assassinated. We think you should skip this terrible injustice.  If you can manage to follow in even half of the great acts that Abe Lincoln did, we think that you will turn out to be one impressive man!

This costume will transform you into one of the most iconic figures in American history. You'll be wearing a black jacket with three buttons going up the front. The vest beneath is actually built into the jacket, making it much easier to wear. You'll be wearing a black bow tie that fastens with Hook and Loop fastener. (Which is good, because we do not know how to tie a bow tie!) Last but not least, you'll be wearing the iconic black hat that we've always seen Abe Lincoln wear.

SAVE YOUR UNION OF TRICK OR TREATERS

If you are taking this costume trick or treating, then it is up to you to make sure your group of trick or treaters sticks together. No one splits off, no one secedes. You're going to be their leader, their shepherd! We know you can handle it.