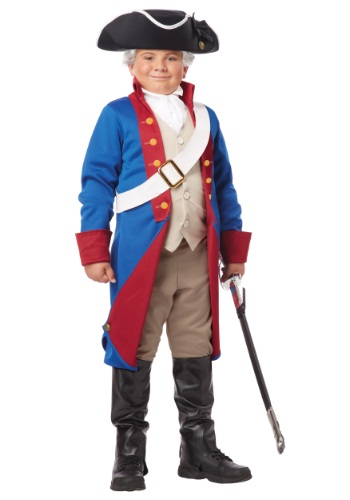 Your kiddo is an early American history buff. His range of knowledge spans from the War of Jenkins Ear (look it up, it’s a real weird moment of British-American history) to the Civil War, and is almost unmatched. He could tell you all about Benjamin Franklin and how George Washington was actually a terrible military leader, at least early in his career. But his favorite thing to talk about is Francis Marion, AKA the “Swamp Fox.” Marion was legendary for his use of innovative and devastating guerrilla tactics against the British. And in this Boy' s American Patriot Costume, your little dude can pretend to campaign alongside the Revolutionary War hero, as he defeats unsuspecting redcoats in South Carolina!

In this great outfit, your kid will look the part as he spouts the grand American designs of the time: life, liberty, happiness. He could even tell you about the failures of the Articles of Confederation after the Revolution, and the quiet retirement of the Swamp Fox to the country. He's pretty impressive, your kid!

And all of this he could do, while dressed perfectly in the look of the time! The colonial style jacket has a blue outer shell and red lining on the cuffs, collar, and lapel. The tan vest panels are sewn into the sides and and secure with buttons in the middle. Lapels are printed with gold braid and faux buttons. To accent the look, a white cravat secures with a neck band that fastens at the back. Meanwhile, a white faux leather chest belt fits over the torso. Black faux leather boots complete the look. If your kid wants to accessorize with more era-appropriate features, make sure to pick up a tri-corn hat or toy sword! Pants are not included with this costume, so, you know...he should wear some.

Here’s an idea, if you really want to see your little dude get excited, dress him up in this outfit, and take him to some of the old haunts of The Swamp Fox himself. Let your little revolutionary hide among the natural cover and pretend to get the jump on those lobsterbacks! It’ll be a great time. For him.