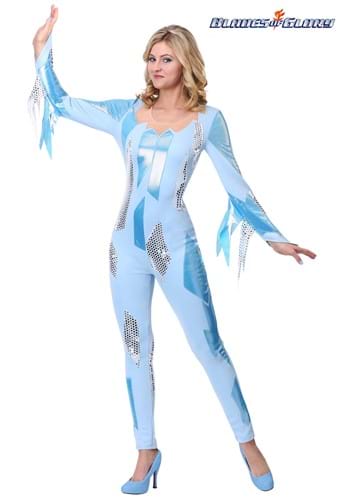 Finding the best way to make your figure skating debut is much easier nowadays than it used to be. Now, you just put on this Blades of Glory Women's Ice Jumpsuit and go to town out there on the ice: if you are horrible, people think it is a parody, and if you are great, they think you have a wonderful sense of humor! There is no losing!

The only thing you have to beware of is the Lotus. There is a limit to people’s ability to let you slide on the ice, and that ends when you cut someone’s head off accidentally. That is pretty uncool, even if you happen to do it as part of the coolest move ever invented in the great sport of figure skating.

That said, there is no better way to make your initial foray into figure skating memorable than to don this awesome costume and show those judges and fans that Jimmy MacElroy lives on in your heart. Even if your skills on the ice don’t live up to what they have seen from the frozen half of fire and ice, you will certainly look the part! This full-length blue and silver jumpsuit has all the movie-accurate details that you will love, from the dangling arm frills to the fractal ice patterns over the main body. The best thing about this costume is the “Made By Us” quality of the construction and the care put into it by our team. You will be sure to capture the hearts of the audience and judges alike when you take to the ice in this number!

We promise that the costume you receive won’t have any of the characteristic smells that are mentioned in the movie, but you might want to think about adding them to give your costume some more true-to-film elements. We don’t recommend it, but you might!