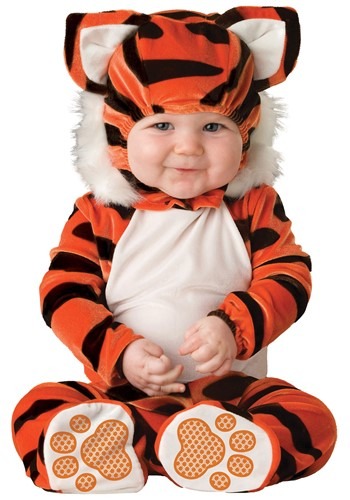 Is your infant like a wild tiger? Do they have a fierce roar? (relative to an infant, obviously.) Do they prowl their playpen, and act like they are king? If this sounds at all like your little one, then we think this costume will be a perfect fit. Tigers are fierce wild cats that rule the jungle. Their stripes make for effective camouflage and their big muscular legs enable them to make incredible leaps.

If we had to be a jungle animal, we would definitely want to be a tiger. Panthers are cool, but they are no match for a tiger. Snakes and lizards kind of scare us, and while we like bears, they are just not as elegant as a tiger. When it comes to their turf, tigers reign supreme. Nobody will mess with this big cat!

This costume will turn your little one into a fierce wildcat! They'll be wearing a polyester jumpsuit that has been stylized to look like a tiger! It has black stripes and a white belly. The bottoms of the booties are designed to look like a tiger's paws, (without the claws, obviously.) The hood is the best part of this costume, though. The hood has faux fur and tiger ears, leaving this costume instantly recognizable. Pair this costume with other jungle animal costumes, or pair it with a circus costume! Either way would leave you with a super cute group costume!

If your little one starts acting a little bit too much like a tiger, we think you had better take the costume away. If they start biting things a little too hard, clawing and scratching furniture, or trying to find raw meat, then they have fallen a little too far into character. It probably won't be an issue, just warning you as a precaution!