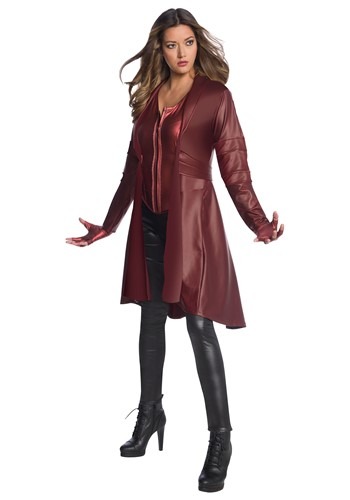 The Chaos of Magic

For magic users like Doctor Strange, magic is all about order. His spells take the form of very elaborate, geometric patterns. They follow strict rules (even if Doctor Strange doesn't always follow strict rules). Wanda Maximoff, the Scarlet Witch, on the other hand? Well, her magic tends to break all sorts of normal rules. When her hands glow red, she can alter the very fabric of reality. She can materialize a villain's greatest fear out of thin air... and yes, she can accidentally mind control an entire city. (With great power comes great responsibility, right?)

Well, if you want to try your hand at the chaotic red magic of the Scarlet Witch, then you're going to need the powerful hero's iconic outfit. This Secret Wishes Avengers Endgame Scarlet Witch Costume perfectly recreates her look from Avengers: Endgame, so you can start making sense of all the chaos!

Inspired by Wanda Maximoff's outfit from the films, this women's costume starts with a sleeveless jumpsuit that fits with a zipper in the front. The included jacket has a foam collar and lapels to add depth and shape to the coat. The jacket is constructed out of a red, faux leather material. The finishing touch to this outfit comes as a pair of fingerless gloves, perfect for manipulating the very fabric of reality! The outfit might not unlock your inherent magical powers, but it will help get you into the mood of fighting against Earth's biggest threats. Thanos will definitely think twice before picking a fight with you when you wear this officially licensed outfit from Marvel!

We recommend pairing this costume with one of our red wigs, since the Scarlet Witch has always been known for her matching red hair. It's also a good idea to grab a few books on magic (like The Darkhold), since you'll need some serious magic skills mastered when you head out this Scarlet Witch costume.