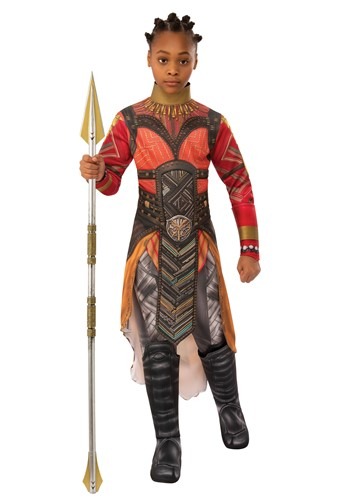 Nearly all of the heroes of the Marvel universe have very full stories. We know a ton about Captain America's wimpy days. We eventually learned that Carol Danvers wasn't a Kree after all. Heck, we even get a few details about Natasha's complicated origin (including her real name). But, that isn't true for the entire cast. Several of the folks that we depend on to keep our world safe remain pretty quiet about themselves and their stories never come to light!

Such is the case for Okoye of the Dora Milaje in Wakanda. How did that early training go? Which tribe did she come from? When did she first heft a spear in the name of the King and did she instantly show herself to be better than the rest of the young would-be Dora Milaje or did she have to struggle to prove herself? These are the mysteries that still demand to be answered of the girl that would one day become the general of the epic fighting force!

Until we have those answers, you and your little one can be the source of all the tales. With this officially licensed Okoye costume based on the Dora Milaje of Avengers: Endgame, the story is ready to be told. Your kiddo will love the warrior feeling of this tunic, printed to look like Okoye's armor and Wakandan beads. It features a foam collar to create her gold gorget and an asymmetrical hemline for the sash and skirt. Printing on the elastic pants, gauntlets attached to the tunic, and boot covers finish this armored look so you can focus on the fun!

Help your tyke solve the missing part of Okoye's story when they practice all those Dora Milaje training moves in this complete costume. Next step is becoming the general of the epic fighting force!