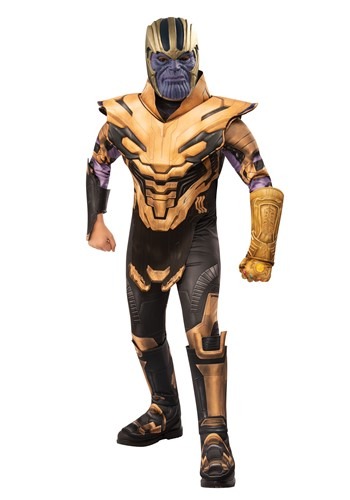 Titan is a word that basically makes us shake in fear no matter what we're talking about. Fred in Accounting just got lunch? Great! He picked up a Titan Burger? Umm. Can that even be eaten in a lunch break!? If we get dizzy on the idea of a giant sandwich, you can imagine the anxiety that we might have about the last survivor of the planet Titan who shows up in all of his mammoth might ready to snap his fingers and bring the universe to his heel!

Add in the fact that he might be wearing shining golden armor and just possibly has put together the matching gauntlet that might make that snap go a bit more literal? Let's just say that we're going to have to deal with this kind of threat with baby steps. In fact, let's go a bit more literal in that! How about we find Thanos in a bit more of a bite-size form so we can get used to the havoc that he can unleash? In fact, we might even get him to change his ways beforehand.

That's why we are glad to know that Thanos can show up in different sizes. He doesn't have to be a goliath that can go eye to eye with the Hulk. Instead, you could give your kiddo this officially licensed Thanos costume from Avengers: Endgame and we'd all have a chance to enjoy this dynamic character. This full costume features the look Thanos had in his full armored glory along with the Infinity Gauntlet. Either one makes him pretty formidable, but both!? It's a good thing that your kiddo will be having too much fun in this look to start any snapping.

The movies might have Thanos at a shy 6'7" tall but the comics report him at over 8 feet tall! That's a whole lotta Titan which means a ton of fun for your little one who likely has some pretty giant aspirations! This costume is the ticket to epic adventure.