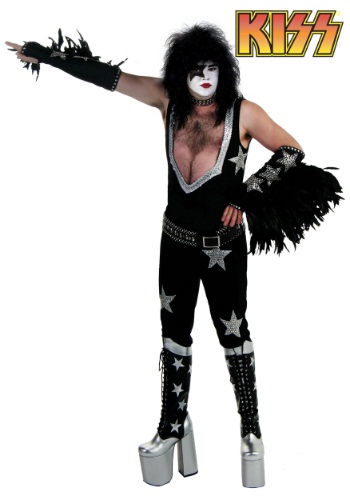 Generally, when people think of KISS, they think of Gene Simmons, a really long tongue, awesome protechnics, or massively energetic live shows...but they don’t always think of Paul Stanley, which is strange, because he was the lead vocalist, guitarist, songwriter, and frontman for the group. But that’s ok (though probably not for Stanley); the Starchild has always been your favorite of the foursome. So now that you’re finally getting a chance to go to an actual KISS concert for the first time, obviously, you know who your dressing up as! Throw on this Paul Stanley the Starchild Authentic Costume and get ready to rock and roll all night!

In this look you’ll be the spitting image of the Starchild. So you better make sure you remember all the lyrics to every song, just in case you get pulled on stage to sing along with the crew.

This costume is officially licensed, so you know its styling and design is spot on. Everything about this look is emblematic of Stanley's iconic stage style. The costume is made up of two parts: a deep cut tank top with an elastic band on the bottom hem to keep it in place while you’re moving like a rock star; and a matching pair of pants that sit snug around your legs and waist.  Silver stars, rhinestones, and sequins pattern shine across the whole costume for an eye-catching and electrifying presence. A studded choker secures around the neck as a final touch to the whole outfit!

With this costume on, everyone will know that Paul Stanley is the best—at least in your book—of the most rocking and rollingest bands of the 70s and 80s. Now it’s your job to make sure people start to think of Paul Stanley more when they think of KISS! You're well on your way to accomplishing that goal.