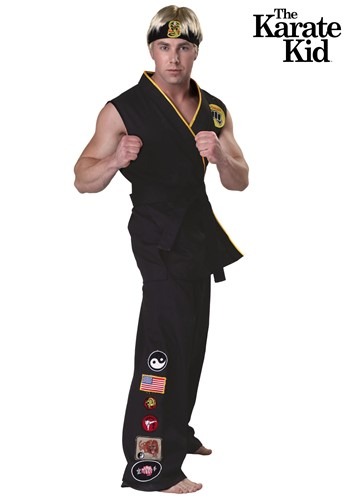 A Villain with Style

Okay, okay! We were defending the Cobra Kai the other day and we took a little heat for it. So let’s be clear, Johnny Lawrence—the top student at Cobra Kai dojo is totally a bully. In fact, he and his friends literally beat the life out of Danny LaRusso without showing any intent on stopping until Mr. Miyagi stepped in. So, yeah, he’s a blond-haired, classic looking 80s cinema villain. Nobody is gonna argue that.

But! How many kids do you know this day and age that are that talented and dedicated to karate? Objectively, Johnny is the best under-18 practitioner of karate in the Southern California area. And we think, just because of that, you should seriously consider a Cobra Kai look.

It's time to join the questionably motivated team of Cobra Kai with this authentic Karate Kid costume. The whole look replicates Johnny Lawrence's 1984 look, including a tunic top with a waist tie and a patch for your choice of name tags. The matching pants have a drawstring waist and five embroidered patches down the right leg. Finish off your movie look with the 2" karate belt and the iconic Cobra Kai headband and you'll be ready for some serious victory. Just remember to fight with your heart first!

Johnny shows he’s a pretty good guy by the end of the movie, even going against the wishes of his own psychopathic dojo leader. So what we’re saying is, Johnny’s not all that bad, and he’s a pretty talented fighter. And you can be just like him (or Tommy or Bobby or Dutch, depending on which name tag you pick) when you throw on this classic Cobra Kai ensemble. Just don’t...don’t bully anybody while wearing it. That’s never going to be cool.