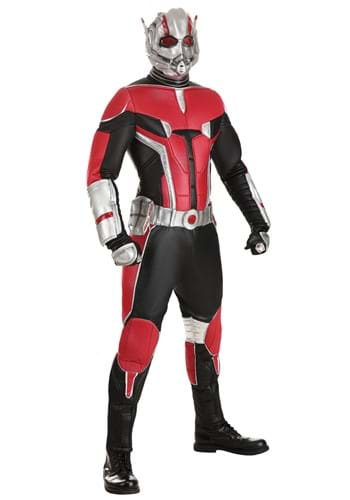 Scott Lang has had a wild path to becoming a hero! He started off as a lowly ex-con sneaking into a weird old guy's lab to get a big payout. Who would have ever dreamed that it would lead to joining forces with Captain America and Iron Man, eating some tacos with the Hulk, and head out to save the universe on official Avengers business! It just goes to show you that anyone can find themselves on the road to heroics. Who knows... maybe this Adult Ant-Man Grand Heritage Costume is the beginning of your hero's journey.

This officially licensed Ant-Man costume does a great job of capturing his suit from the films. It comes with a detailed jumpsuit that has foam padding and molded pieces on the exterior to recreate his armor from the Marvel Cinematic Universe. The suit has a zipper in front, making it incredibly easy to change into it in moments. The molded belt has a silver, metallic paint job, and fits with a simple fastener in the back. The included gloves have matching silver molded pieces on the top. To bring the whole outfit together, this costume comes with a mask inspired by Scott Lang's mask from Avengers: Endgame. The eyeholes have mesh on them to allow for limited vision and the top even has a pair of antennae! Once you suit up, you'll be ready to tackle any world-saving mission, whether it's time travel... or taco Tuesday!