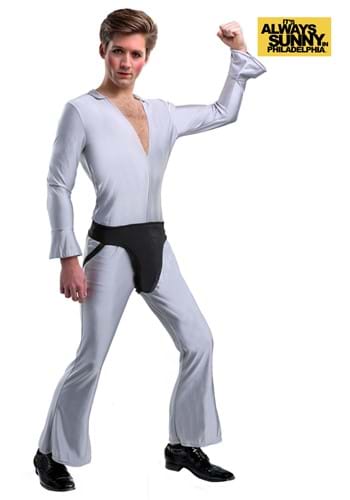 When will the Nightman strike? No one knows. Actually, no one really knows who, or what, the Nightman is, aside from Charlie Kelly. That makes it rather impossible to determine when the Nightman would rear his ugly face! So, how do you ward off an indescribable menace, such as the nefarious Nightman? Well, only the power of the Dayman can stop the Nightman!

Who's this Dayman, you ask? Well, quite simply, he's the fighter of the Nightman. Also, he's a master of karate... and friendship... for everyone. And that's all can really tell from Charlie's very vague song about the guy. We know he seems to enjoy wearing spandex and we also know that he absolutely refuses to pay the troll toll at all costs. Do you need a way to fend off the Nightman? Well, then this Dayman Costume will help turn you into the fighter of the Nightman! It's officially licensed from It's Always Sunny in Philadelphia and does a great job of recreating the costume worn by Dennis in the episode "The Nightman Cometh."

This Always Sunny costume is made out of a spandex blend material, which stretches for a form fit. It features flared sleeves and pant legs for a show-stopping style. Then, there's a codpiece. Why is there a codpiece? Well, the real reason is that Dennis probably wanted to showcase his raw, manly allure. But, our designers just rolled with it. This thing comes complete with a ridiculous codpiece that will have you ready for a few pelvic thrusts as you sing your own rendition of the Dayman's theme song!

Fighter of the Nightman